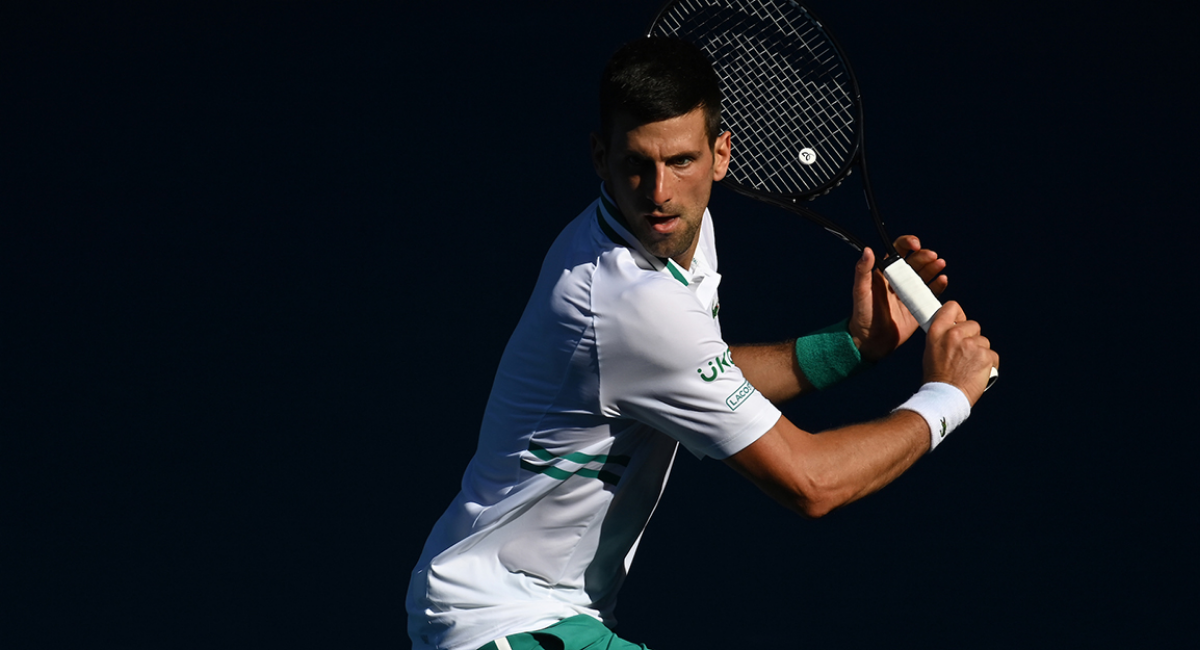 Everyone who has played tennis either recreationally or professionally knows the importance of having a solid backhand. The backhand is much harder to master than a forehand owing to the technical abilities that are required to perfect a backhand. This takes years of hard work and practice and does not happen overnight. If a player possesses a backhand which is inconsistent or not powerful, that player is likely to lose a lot of points as a reasonably good opponent will exploit this weakness. This is why it is vital that a player has to have a powerful and consistent backhand in his/her repertoire in order to succeed in tennis at a higher level.

In my opinion, the following five players have possessed the best backhands of all time: 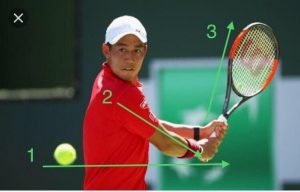 Japanese tennis sensation Kei Nishikori has been the top-ranked Japanese player for over a decade now and is the best men’s tennis player to ever emerge from the island nation. He is comparatively shorter than most players on tour standing at just 5 feet 10 “. To counter his height disadvantage Nishikori has arguably the best footwork on tour, is extremely consistent and has outstanding movement on the tennis court which makes him one of the best counter punchers on tour. To add to this package Nishikori currently boasts one of the best two-handed backhands on tour at the moment. Nishikori generates very high racquet speed and topspin on his backhand which he usually hits very deep into the court, making it difficult for opponents to hit a winner off his backhand. He uses this technique to get a loose ball from the opponent and put away the next shot which has proven to be very effective over the years, hence resulting in Nishikori being a mainstay in the Top 10 for many years.

Kei Nishikori sets up his two-handed backhand in textbook fashion, and his body coils with the shoulders turned to the net in excess of 90 degrees. This allows him to hit with surprising power and plenty of spin, which for a short player is very important. Nishikori also exhibits a massive backswing with the racquet face pointing towards the net during the initial part of the swing, while following through he points his racquet face slightly towards the sky after which he has a slight rotation in the racquet head wherein it faces towards the ground which helps him generate immense power and spin. This is an extremely difficult art to master and the fact that Nishikori does this with such ease makes him more than worthy of a place in the top 5 best backhanders of all time. Also, an important point to note Nishikori hardly ever misses a backhand!

Ever wondered who is tennis’ greatest underachiever? It has to be former Argentinian world number 3, David Nalbandian. On his day, with his gifted talent and powerful groundstrokes, he was capable of beating any player in the world. He along with David Ferrer is considered to be the greatest players to have never won a grand slam, although Nalbandian has reached the semi-finals of all four grand slams which shows that he was an all-court player. It was unfortunate that Nalbandian’s career was hampered with injuries and he was playing during the most competitive era of tennis with the likes of Roger Federer, Marat Safin, Lleyton Hewitt and many others competing during his era to name a few. Regardless of all this, during his time Nalbandian possessed in his repertoire one of the best double backhands on tour.

Nalbandian’s trademark shot is his double-handed backhand down-the-line, which was often regarded as one of the best double-handed backhands on the men’s tour. He often used it to set up a point, by either hitting a clean winner or forcing a weak return from the opponent. Nalbandian boasts a smooth, fluid and seamless motion while hitting his backhand, where there is no pause in the racquet during the take-back, a problem which many recreational players face while hitting their backhand. Nalbandian chooses to use a fairly straight back take back, but one important key is that Nalbandian drops his racket head below the level of the ball seconds before he makes contact with the ball. Like on the forehand, dropping the racket head below the level of the ball is essential for generating topspin to increase the margin of safety on the shot. These facets make Nalbandian’s backhand one of the most effective and consistent backhands ever to be seen in the sport. Furthermore, he possessed a brilliant jump backhand which he used numerous times to drill a winner down the line. This further emphasizes the natural talent that he had as this shot is borderline impossible to hit accurately and Nalbandian made it look unbelievably easy! 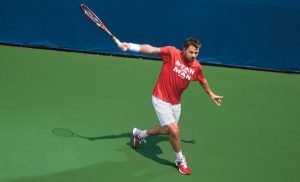 The first one-hander to make it to this list is Swiss sensation Stanislas Wawrinka. For the majority of this decade, Wawrinka has been ranked in the top 10 which is a commendable feat considering the vast array of talent that has graced the men’s game. Within that time, he has managed to win 3 grand slams which is a creditable achievement. Wawrinka has one of the best single-handed backhands in the history of the game and generates unbelievable topspin and power. In addition to this, Wawrinka also has a solid forehand, a powerful serve and a decent volley game. More than his tennis prowess, Wawrinka is also well known for his fighting spirit and his mental strength on the court, wherein he has won numerous tight matches and has come back from seemingly unwinnable positions numerous times in his illustrious career.

Wawrinka’s backhand drive motion is unique in certain aspects. While releasing the racquet to make contact with the ball, he turns his hip and body which allows him to open up his chest further to generate more acceleration and power on his stroke. More often than not, he contacts the ball at the 45-degree angle of the court which is considered to be the perfect contact point. He also is very good at transferring his weight while following through with his shot, which can be noticed while watching slow-motion videos of his backhand which results in ferocious power. Wawrinka also has a very effective slice and has the ability to hit winners from anywhere on the court. He also deals with high loopy shots well on his backhand side, which most one-handers struggle with. If you want a visual on just how well he can strike his backhand, take a look at his backhand down the line shot versus Novak Djokovic at the 2015 Roland-Garros Final. 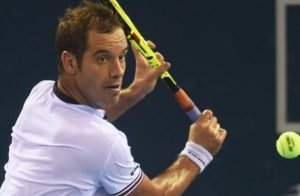 Probably the least high-profile player in this list is French stalwart Richard Gasquet. Big things were expected from Gasquet after he broke into the top 10 almost 13 years ago. However, he has been quite inconsistent over the years and has been in and out of the Top 20 over the years. This is largely due to his weak forehand and serve which top players exploit. He also loses a lot of matches from dominant positions and lacks the mental strength to handle high-pressure situations. Furthermore, his movement has been questionable and has comparatively slow movement around the court compared to his counterparts. However, all these negatives aside there is nothing negative that can be said about his single-handed backhand which is arguably the best one-hander on the men’s tour right now.

Gasquet is not a big built player like many others and yet manages to generate one of the most powerful backhands on tour. This is solely down to his technical ability and timing which he has mastered over the years. In preparation for the shot, Gasquet positions himself behind the ball and transfers his momentum forward in such a manner that all his weight is transferred on to his front foot as he strikes the ball in front of his body. Gasquet uses an eastern grip while striking his backhand which allows him to keep his racquet face closed upon contact thereby resulting in a lot of topspin being generated. Gasquet has an unusual take-back – the face of the racket is open as if he is preparing to slice the ball, adding disguise – but his fundamentals are spot on. He turns his shoulder and sets himself behind the ball. His backhand is technically different from Wawrinka, however, is equally if not more effective. Hopefully, he works on the other facets of his game and he can break into the top 10 once again! 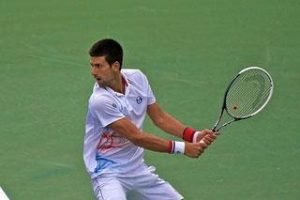 Does this man really need any introduction? 17 Time Grand Slam winner, Current World Number 1, best returner of serve the game of tennis has ever witnessed, unbelievable agility are just a few of the superlatives one can use to describe the superhuman that is Novak Djokovic. He has been the best player in the world for the last five years after changing his diet and hasn’t looked back since. He has been ranked in the top 3 for the majority of the last 13 years, which not only shows his consistency but also his fitness to compete at the top level for such a long period of time. Novak is one of the few players that has solid groundstrokes of both flanks. However, since backhand is technically a harder stroke to master his backhand is considered to be of a higher level. The only notable weakness in Novak’s game is his overhead, however, this is a shot which is not hit very often in tennis and does not impact match outcomes. Novak has the best two-handed backhand that the game has ever seen, strongly owing to his ability to strike solid returns of his backhand which the majority of the players cannot do.

Novak Djokovic Backhand technique is simple, yet flawless and smooth which allows him to generate both power and topspin from anywhere on the court. When dealing with pace Djokovic blocks and jabs the ball on his backhand but can also redirect and counter attack even when on the run. He also has the unique ability to hit a two-handed backhand on the slide which most top-level players struggle to do which sets him apart from the others. If we look at Djokovic’s backhand, we see the Serbian does not alter the level of the racket head throughout the duration of the take-back. If he were to raise the level of the take-back, he would be costing himself adequate time to finalize his swing. In contrast, if he were to lower the level of the racket head, he decreases the size of the circle and ultimately reduces the amount of spin and power he is able to impart upon the ball. Such a high level of mastery over the stroke puts him at number one on this list. This may be pushing it, but if Novak surpasses Roger Federer’s grand slam record he has to be considered the best player of all time doesn’t he? 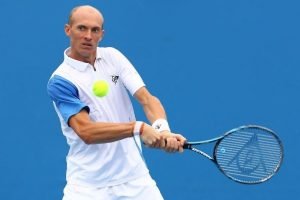 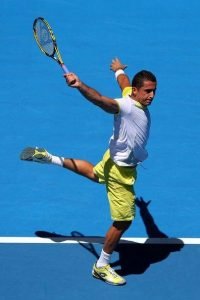